How to explain the death to our children

When we need to explain to the little ones a complex issue such as death, it is difficult, and we never find the right words to say. In these difficult situations, it is imperative not to lie or hide the truth. It is also necessary to take into account what the children know and understand about death based on their age.

Up to 3 years can understand the emotions, the sadness, the fear and, therefore, what death causes, but they cannot have clear the concept of “life ending”;

Between three and six years they perceive the difference between what is alive or not, but they can hardly understand that death is something definitive. They often ask: when is it coming back? Where is he gone?;

Between the ages of six and nine, they know that death is irreversible even if “forever” is a complicated concept to accept and understand for them;

Between nine and ten years is the moment when they know well what death is, what it causes and that it is definitive and not reversible.

The topic of death is in cartoons, in nature, and in everyday life. However, avoid talking about the end of life, it is not the right solution, even if the easiest. Educating to death means understanding and accepting that it is part of life itself.

Although it seems weird, talking about death should be a “natural” thing, as it is part of our existence (all living species born, grow, and die). Children need to know that adults do not tell lies and do not hide anything about something so important. Identifying, understanding things, as they are, helps to grow and to have less fear. Fear arises from not knowing what is in front of you and not knowing how to deal with it.

When talking with the children of death, do not to use the euphemisms instead use the correct words and not say: he did not make it, he disappeared, we lost your little brother. The answers of the children, in this case, could be: Where did he go? Where did you leave it? He could not do what?

Children need to understand what happened. To do this, we can use educational tools such as books or cartoons that speak of mourning and the free the children to feel emotions and express their sadness and anger.

Another important thing is not to hide your suffering, but avoid crying, sharing with your children their feelings and explaining that it is not the death itself that makes you feel sad, but the separation with the person we love. In this way, we will avoid creating fears and anxieties regarding the concept of death itself.

The memory beyond death

Telling, looking at pictures, and remember who is not there anymore is very important to make the children understand that, even if that person is no longer physically present, is going to be present in our lives thanks to his memory.

People gone are celebrated in most of the world on 2 November. In some cultures, this event is very joyful, especially for children like in Sicily. Here, according to tradition, the night of All Saints, on November 1, all the dead walk the streets of their cities visiting the homes of their families still alive and leave to the children gifts that testify their passage.

In the morning usually children find gifts and sweets, such as, for example, the “bones of the deads biscuits” (small, very hard biscuits made with flour, sugar, cloves, water and cinnamon); whites or black biscuits (sprinkled with cocoa, sugar or lemon icing); the copper of Naples (sweets with a soft dough with cocoa covered with chocolate glaze), “sugar puppets” (anciently shaped like bersagliere, doll or paladin), and the colorful Martorana fruit.

LEGGI ANCHE: CARAMELIZED ALMONDS: A SWEET FOR THE HOLIDAYS

The next day, families go to cemeteries to remember and thank their loved ones, called in Sicilian “morticieddi.” Even this moment is experienced as a joyful one because the presence of the passed away loved ones is “alive”. In this way, everyone, especially children, can remember them without fear. 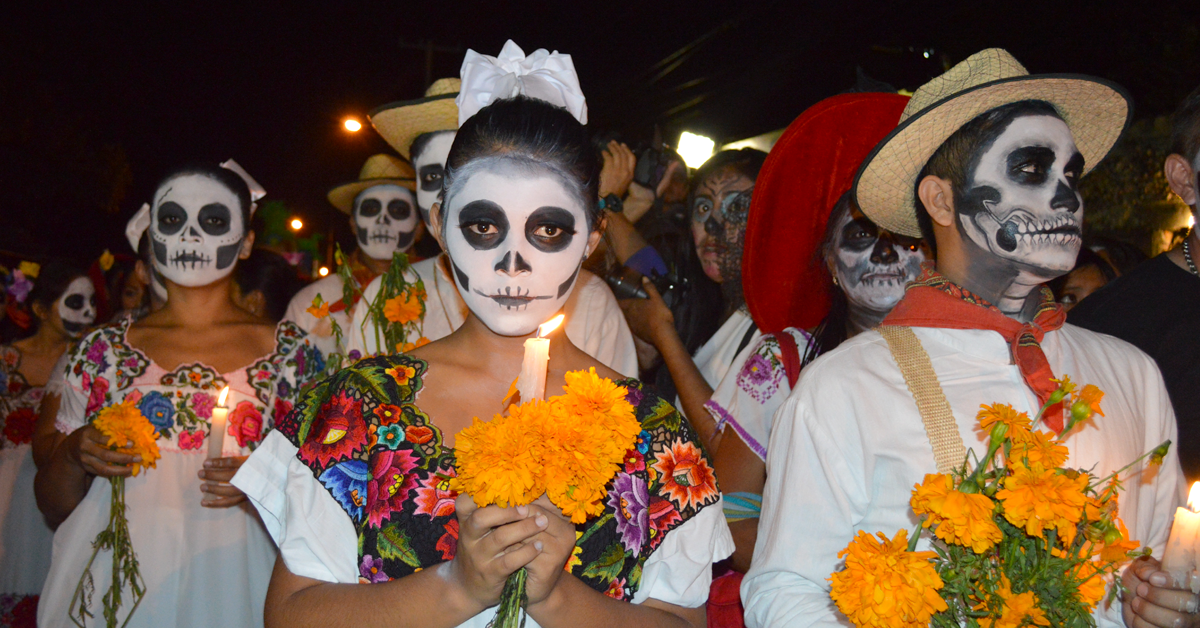 Another very joyful festival commemorating the deceased loved ones is El Dia de Los Muertos, which became a World Heritage Site in 2008. During the festivities, which last for many days, the souls of the dead, as in Sicily, are welcomed with joy because they are the members of the family who come back to the living once a year.

This festival has ancient origins, dated back from Aztecs and other pre-Hispanic cultures that considered death as a natural phase of life (who died is still considered a member of the community and kept alive in memory and spirit thanks to mind).

One of the symbols of the Festa de Los Muertos is the Calavera or the skulls. In Mexican culture, Calaveras is a way of recognizing that life is sacred and that death is just another rite of passage, no less sacred than life itself. Death, in Mexican culture, should not be feared or avoided and it is indeed celebrated.

ABOUT THE AUTHOR
Letizia Grasso, Educationalist
“All grown-ups were children, but few of them remember it” This phrase is engraved on my heart. The child who marvels at small things is always with me. I firmly believe that the school should focus on self-construction of knowledge through direct contact with the outside world and, therefore, through the experiences of life. A school open to life and from life itself learns. A school that teaches to observe every little thing, to wonder and to ask questions. A school that forms adults who know how to reflect and put into a relationship the mind and heart.”